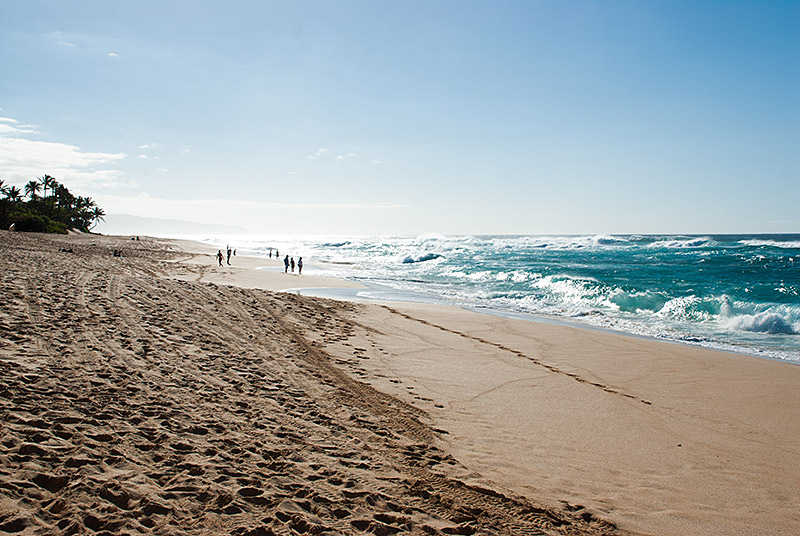 During our trip to Hawai’i, we wanted to spend a day outside of Honolulu. We’d been staying in Waikiki, AKA TouristWorld™, so we cruised up to the North Shore looking for great beaches and food.

We headed up to Hale’iwa after stopping at Don Quijote for some quick bento breakfasts and coffee. Spam for the road: it’s a must. About an hour later, after passing the Dole pineapple plantation and heading through the middle of the island, we stopped in Hale’iwa. Hale’iwa is the main hub of the North Shore. We stopped here and did a bit of shopping and walking around, then headed towards Matsumoto’s Shave Ice to meet up with my friend (but sadly we didn’t get any shave ice!).

Kawai is a local on the North Shore and, as evidenced by him waving to everyone we saw and knowing each truck that drove by, he knows everyone here. He was able to throw us in his truck and take us to some of the best spots and local places I’d never visited before. 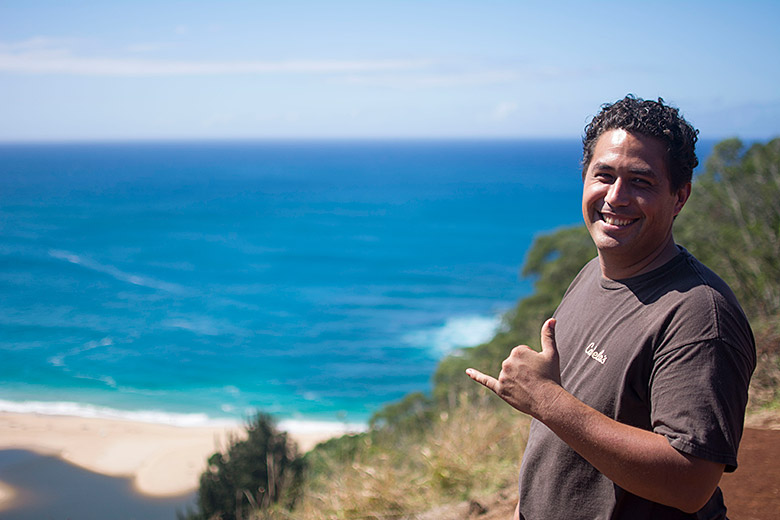 Everyone who is a mutual friend of ours and knew we were hanging out said the same thing: When you go to North Shore, Kawai’s going to take you to this one sushi place. He always does. And sure enough—he did! Banzai Sushi. Banzai Sushi is a cute-looking spot in the back of a parking lot, and we ate outside on the floor. No joke, this was some of the best food we ate all trip. The coconut shrimp actually had coconut taste, unlike the kind you get in Seattle, the avocado tempura was great, but the best thing was the Lemon Drop Roll. It’s a spicy tuna roll, topped with hamachi, lemon slices, and ponzu sauce. It was a delight. The spicy tuna and the citrus kick went so well together! Justin was a big fan of their goma-e as well. We also got the Red Dragon Roll, Gnarly Marley Roll, and the Banzai Roll. We ate a ton. 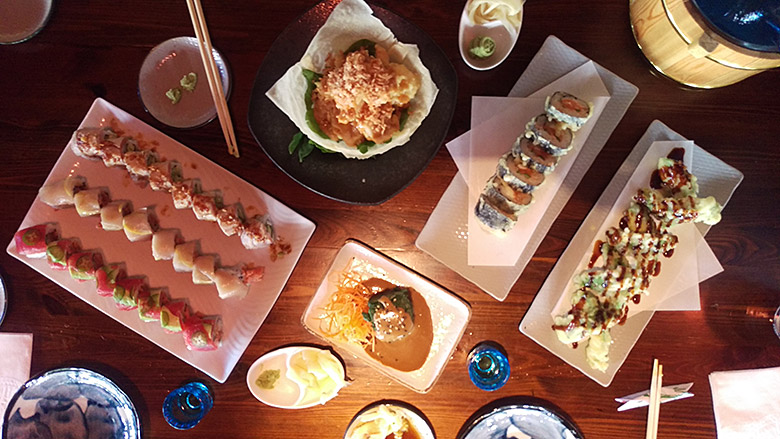 The whole shebang at Banzai Sushi

After lunch, Kawai took us towards Waimea Bay, turned at the Foodland in Pupukea, up the hill to the Pu’u O Mahuku Heiau. A heiau is a Hawai’ian temple, used for community gatherings, presenting offerings, worship, and other things. This one is the biggest left on O’ahu! We headed over to the ledge which overlooked all of Waimea Bay and Waimea Valley. From here, you can watch the big waves on the north end of the bay. Today they were “only” 10 feet. 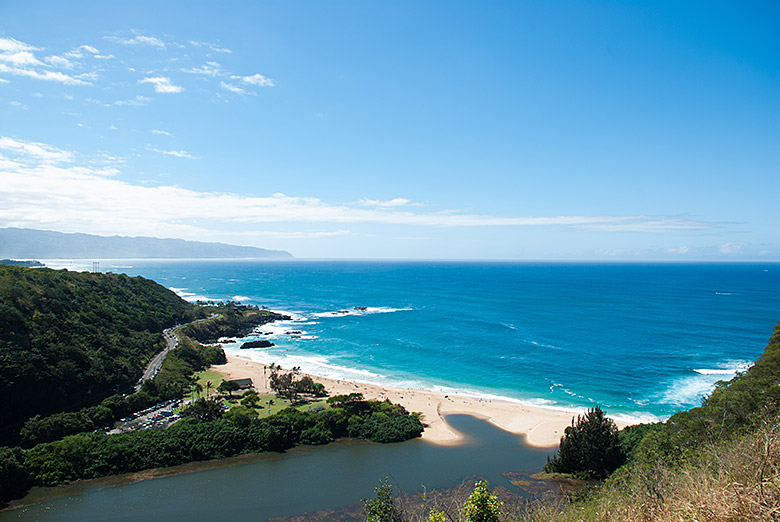 Overlooking Waimea Bay from the heiau 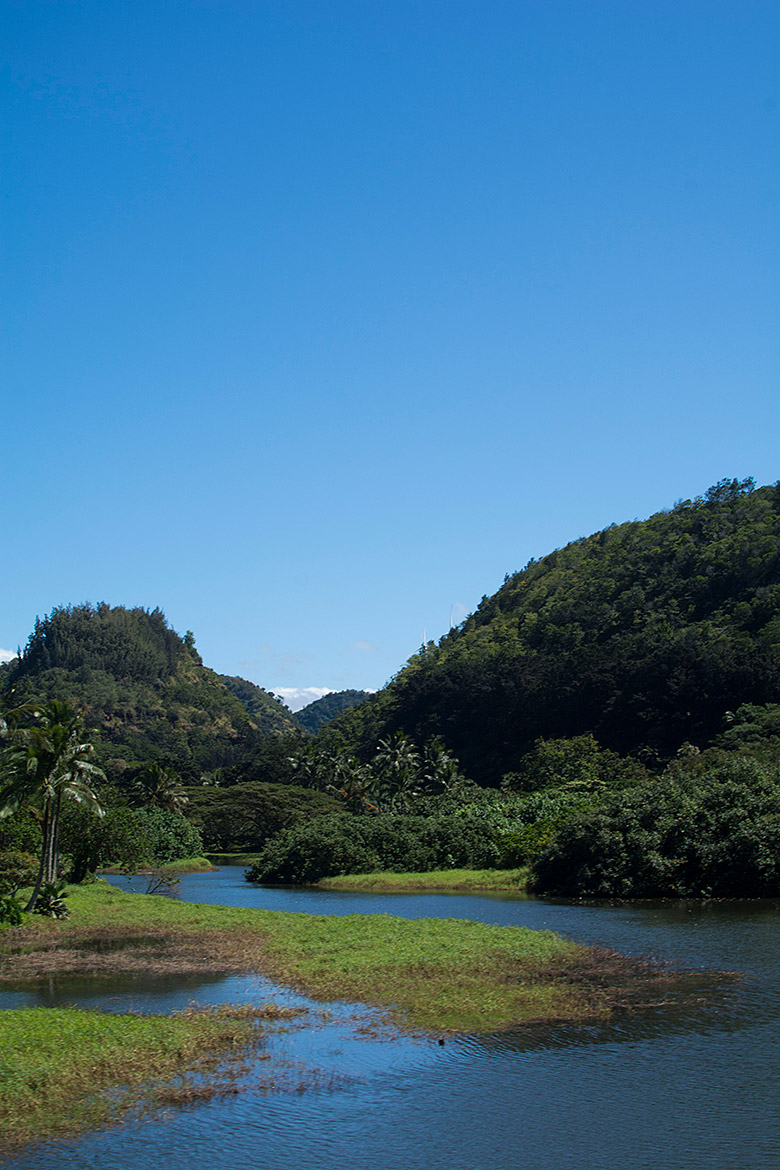 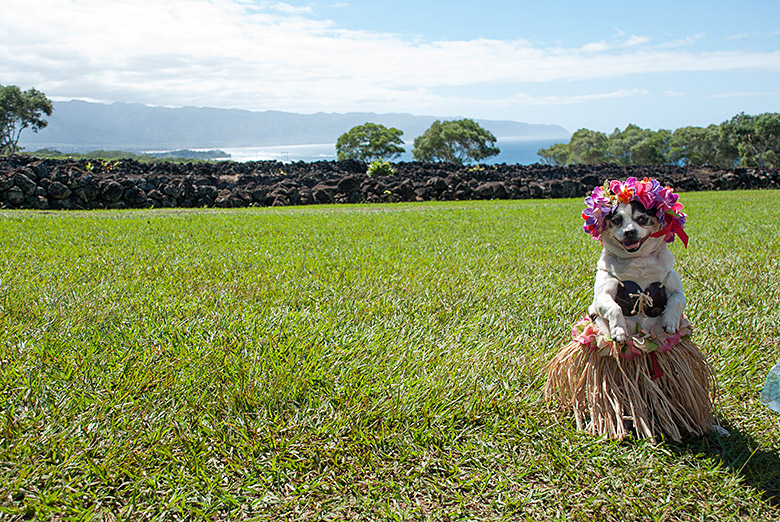 We met a hula dog!

Being at a sacred Hawai’ian spot as a haole and non-Hawai’ian was an interesting experience. I wasn’t very familiar with what heiaus were and how they were used while I was there, so I generally tried to be respectful and to not do anything too stupid. It was a beautiful spot and there were offerings that people had left there. Some people had left garbage, too, which was a total dick move on their parts. 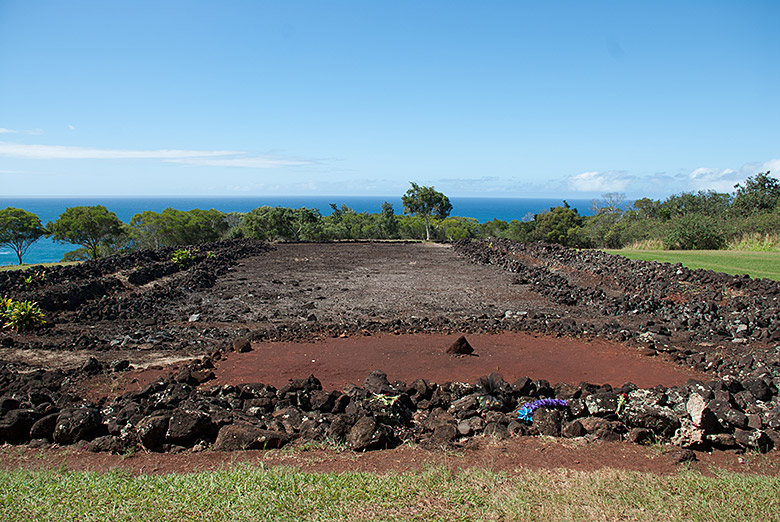 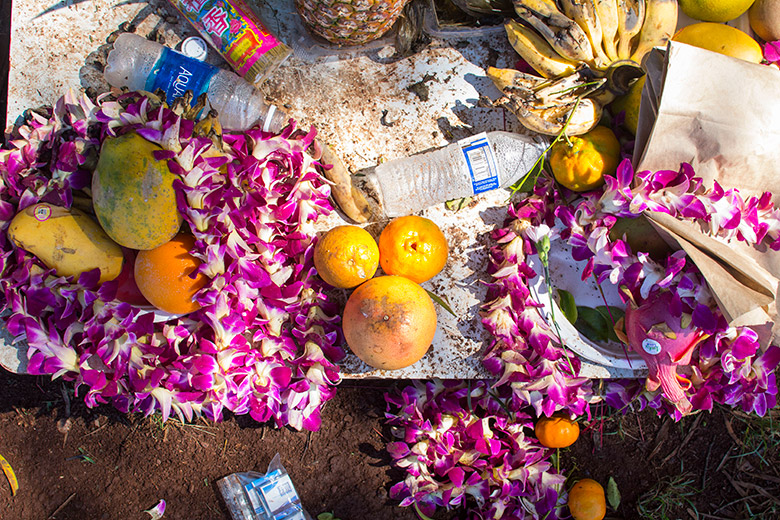 Some of the offerings at the heiau. Mostly leis, some food. Some jerks left garbage. Ugh.

From there, we headed over to Three Tables Beach, learned about Mary’s Garden at Shark’s Cove, aaaand decided we needed to eat more. Of course. So we made a pitstop at Crispy Grindz, a Brazilian food truck right up the road. We grabbed a coxinha and a few pastels and headed to Ehukai Beach to watch people try and surf the Banzai Pipeline. 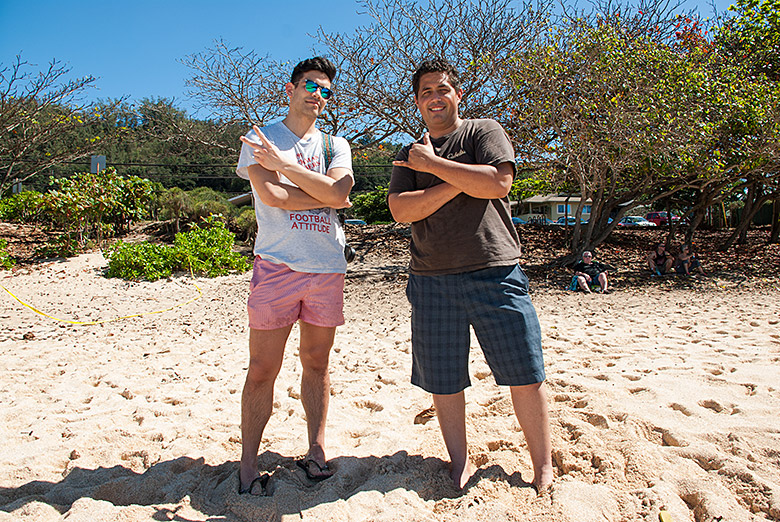 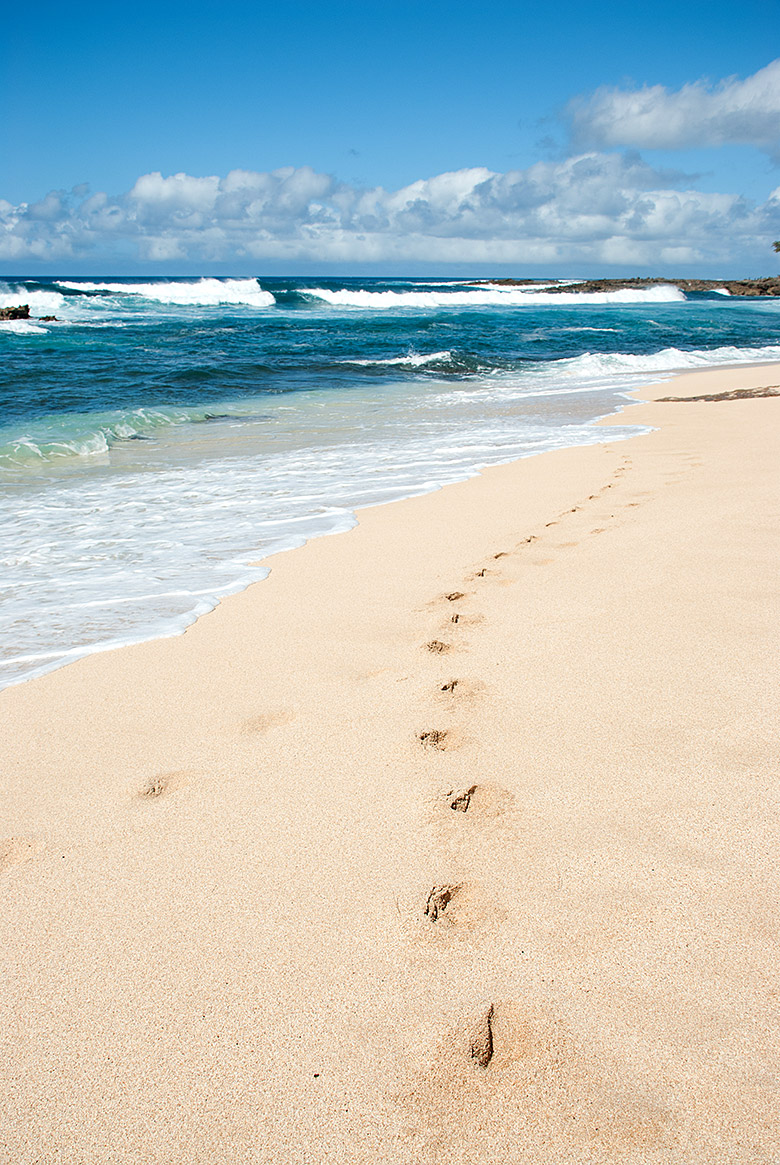 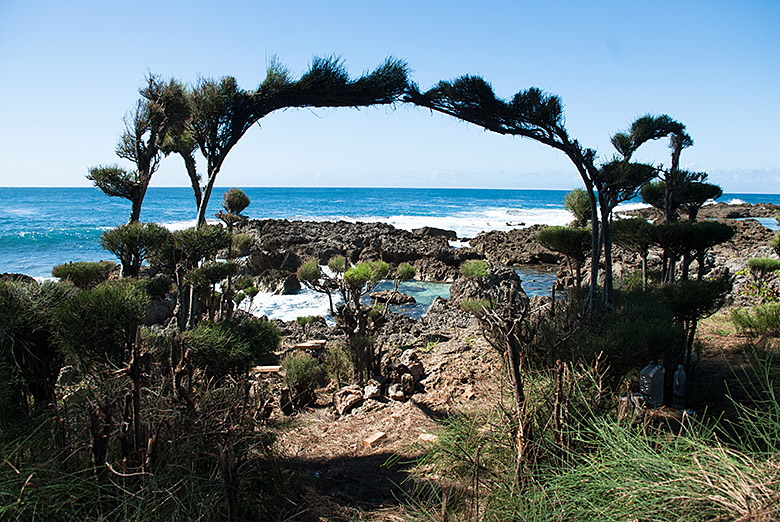 Mary’s Garden by Sharks Cove. A large selection of carefully pruned plants and trees right along the edge of the water. Named after the woman who takes care of them. 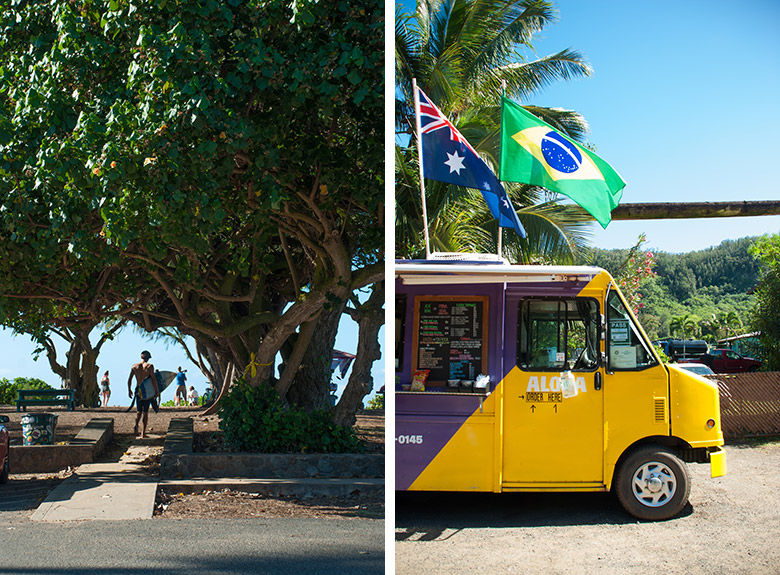 Left: A surfer heading out towards to beach. Right: Crispy Grindz truck

We hung out here for a long time, just hanging out in the sand and eating. Watching people surf. It was nice. Hawai’i is nice. Everything is nice. 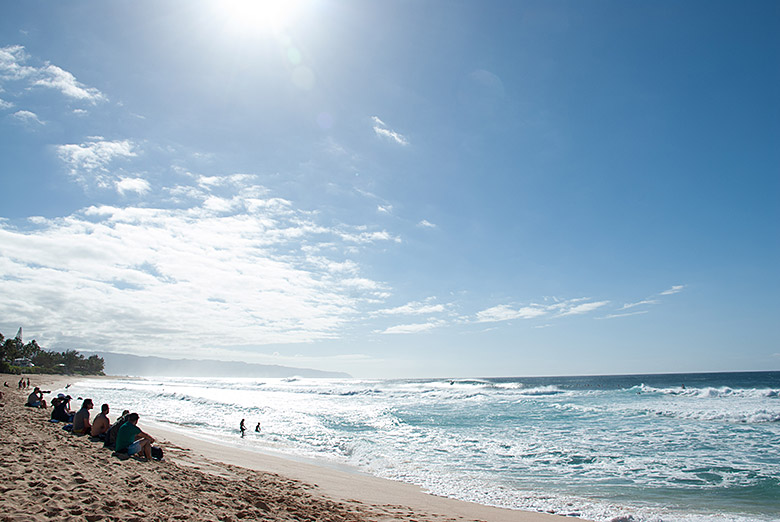 Watching the surfers on Ehukai Beach 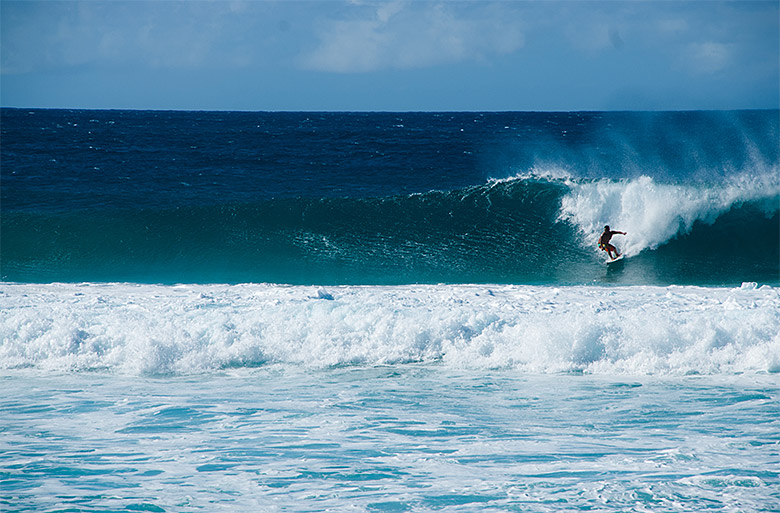 Surfers on the Banzai Pipeline at Ehukai Beach 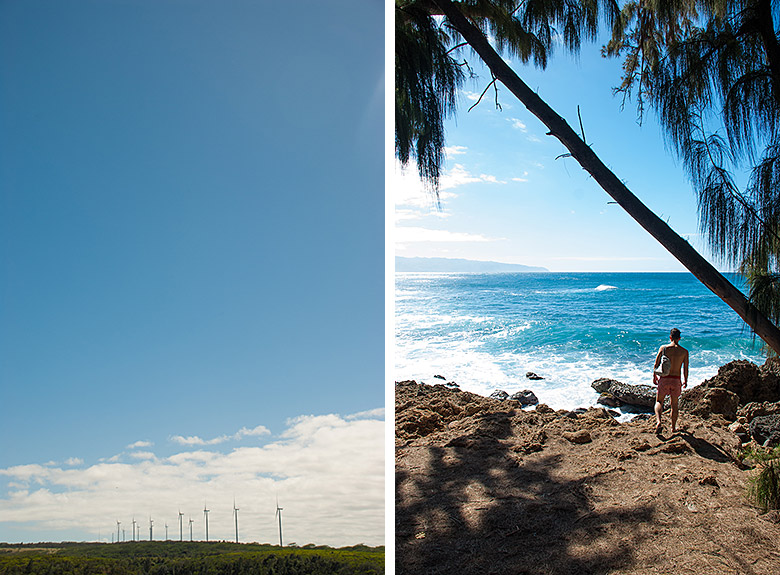 Kawai wanted to take us around the area a bit more, so we headed up into the hills. Along the drive, he was pointing out where Pete Carroll had a house, Kelly Slater, Billabong, and others did, too. He told us all about how native Hawai’ian groups and local residents have been resisting development to “keep the country country.” Land preservation is a big deal in the whole state, and there was a huge fight against adding in wind turbines, and expanding the Turtle Bay Resort, and other big development deals that would’ve brought in unsustainably large numbers of people, changing the character and history of the island. 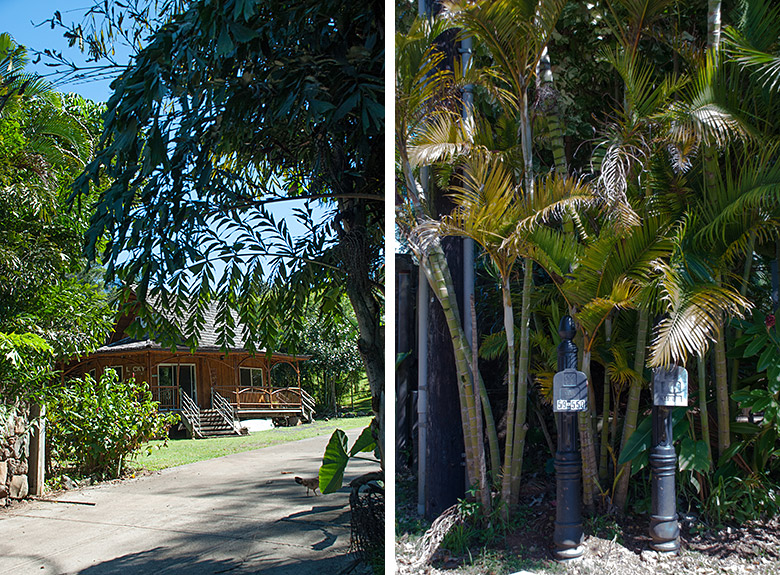 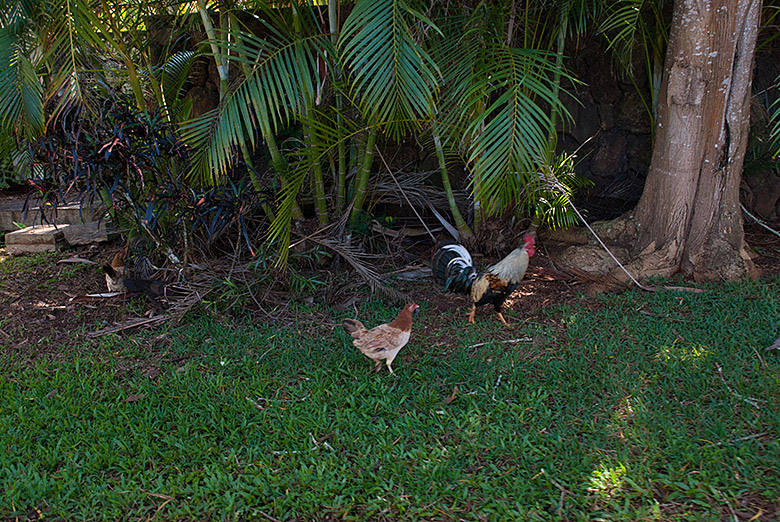 Chickens chillin’ in the shade.

Cruised on up to Sunset Beach after that, where they were holding the APP World Tour Sunset Beach 2017 stand-up paddleboarding championship. Justin tried to dip a toe in the water and instantly got yelled at. For good reason. (He’d die.) It was finally time to leave, which meant…time to meet Justin’s family in Hale’iwa to eat more! 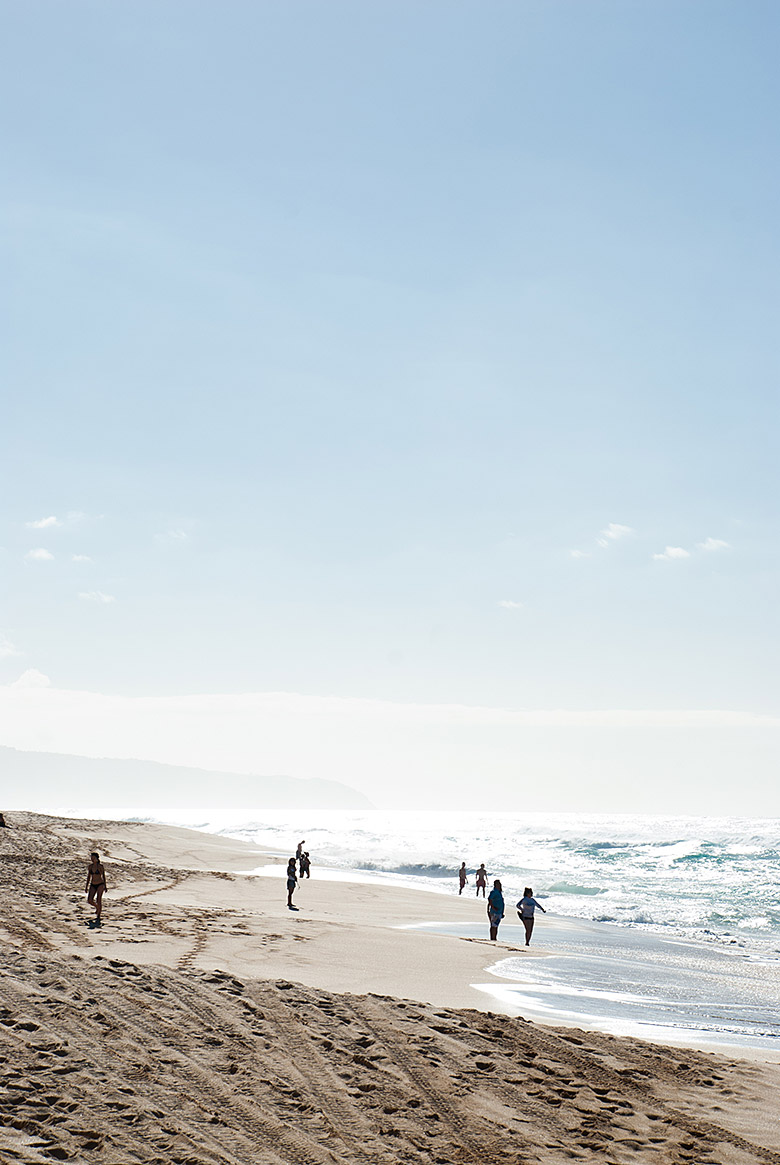 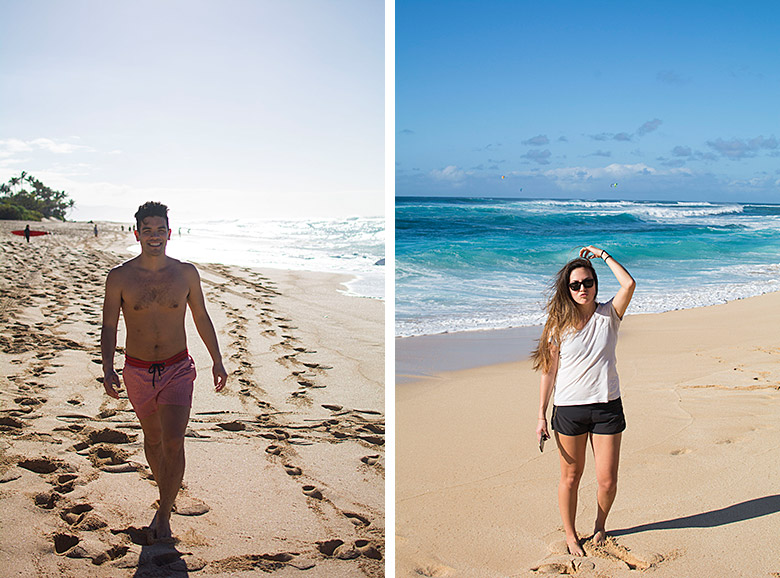 The Half+Half team at Sunset Beach

But first! Kawai asked, “You guys like pie?” and, uhh, heck yeah we do, and so he drove us the opposite way over to Ted’s Bakery. He ordered a chocolate haupia pie, and we cut it up right there and ate a few slices. The pie has a layer of chocolate pudding, then a layer of haupia, and is topped with whipped cream. Justin just about lost his damn mind. He quickly proclaimed it to be the best pie he’s ever eaten, and said that it reminded him of Almond Joy—although the pie had nothing to do with almonds, it had everything to do with joy. 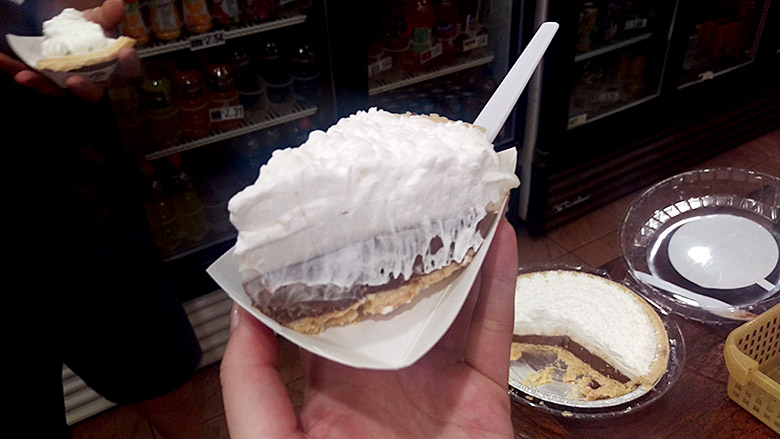 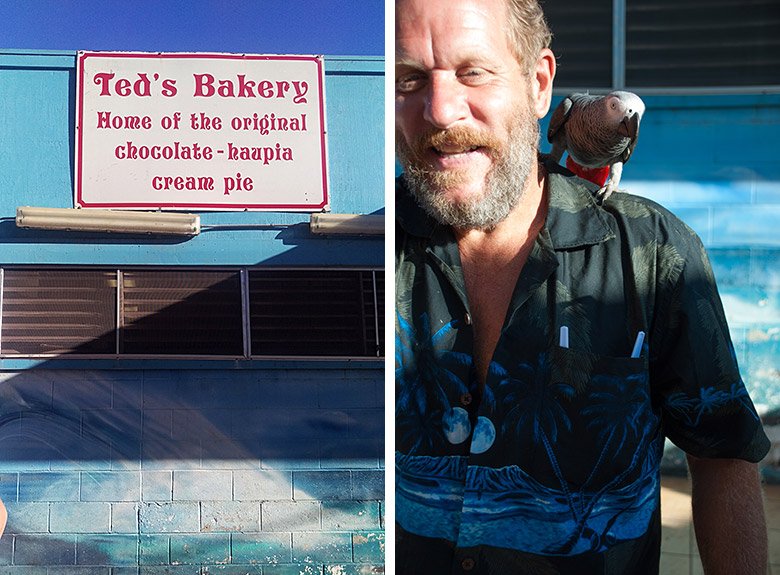 Left: You know it’s gonna be good when it’s right there in the sign. Right: We met a man with a parrot at Ted’s Bakery too.

We finally got back to Hale’iwa and went to Honos Shrimp Truck with the whole crew. Honos is a Korean-owned shrimp truck that stands for “Hawai’i Ono Shrimp,” or Honos. We got a ton of food: the original butter garlic shrimp, a sweet and sour shrimp, the spicy shrimp, and a plate of kalbi. The North Shore is known for these trucks because there were a lot of big aquaculture farms, and their purveyors started selling freshly cooked shrimp from the sides of the passing roads. 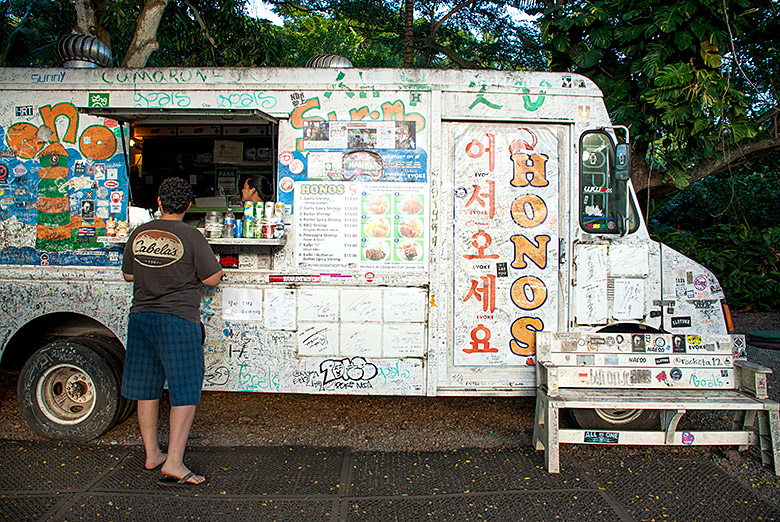 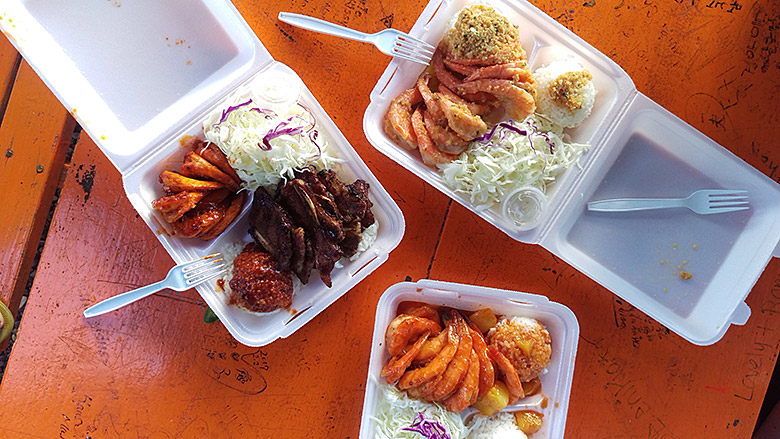 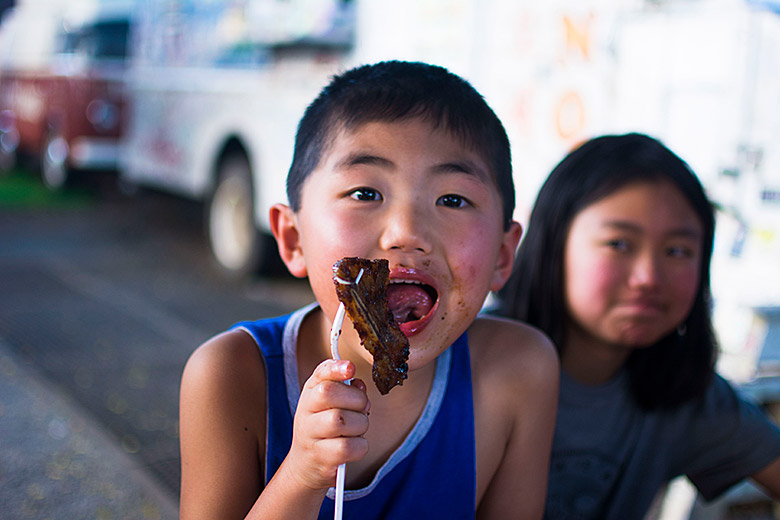 Evan destroying all of the kalbi

Time to Head to Honolulu
The next time we’re in O’ahu, I’d love to spend a few days in North Shore, just hanging around the beach and relaxing away from the city for a bit. Hopefully it’ll be sooner rather than later! 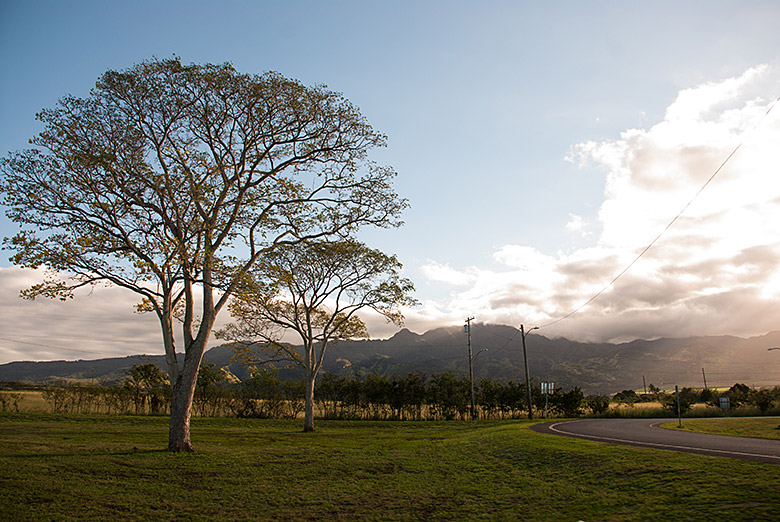 The road to Haleiwa at dusk

Have you ever been to the North Shore? Where were your favorite spots?